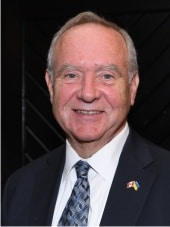 Bohdan Kolos is President of Plast, Ukrainian Youth Association of Canada (Ukrainian Scouting). Bohdan graduated from Western University, earned a Masters of Education degree from the University of Toronto, and became a Certified Health Executive and Certified Management Accountant.  After working for 25 years as an educator, he now is active in a number of charities in Canada and Ukraine.  He represents “Friends of Dzherelo” on the CUF Board.

In Ukraine, Bohdan developed and regularly teaches courses for secondary school administrators, and coordinates a students’ stipend fund in seven universities and schools in Western Ukraine. On four occasions Bohdan worked as an observer and team leader in short term election monitoring in Ukraine for the Canadian government, and once, in Moldova for the Organization for Security and Cooperation in Europe (OSCE). Bohdan considers himself a seasoned traveler, an adventure hiker-camper, and an arts and culture admirer.