Rehabilitation Retreats for Families Affected by the Antі-Terrorist Operation (ATO) in Eastern Ukraine.

In April 2014, Canada-Ukraine Foundation (CUF) initiated and conducted a needs-assessment in Ukraine to identify optimal means of addressing the medical requirements of those affected by the Euromaidan protests. While the primary management of injured patients was conducted with remarkable resourcefulness, the psychological trauma endured by many required action from the CUF medical response committee.

In the Spring of 2014, psychologists from different regions of Ukraine were brought together for a training seminar on how to treat patients suffering from depression and PTSD. These same psychologists are now counseling soldiers from the frontlines, war widows and children who have subsequently become half-orphans due to the War in Eastern Ukraine. 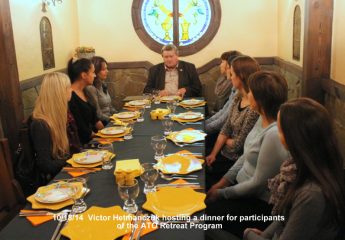 The Program treated families affected by the ATO (in groups of approximately 40 people), from different regions of Ukraine. Those affected came together for relaxation and rehabilitation at hotel Khatky Ruslany in Vorokhta, Ukraine. Participating families were selected with guidance from the Ministry of Defense of Ukraine, the Security Service of Ukraine, Initiative E+, other NGOs and lists of widows provided from the volunteer battalions.Four Sessions were run in 2014 and treated 47 families (108 people in total) from Lvivska, Volynska, Ternopilska, Khmelnytska, Zhytomyrska, Kirovohradska, Sumska, Chernihivska, Kyivska, Dnipropetrovska, Kharkivska, Poltavska, Cherkaska, Vinnytska, Khersonska and Zaporizka oblasts. Participants had the opportunity to be counseled by psychologists in both private and group sessions. The hope was to provide these families with a change of environment – one in which they were able to start processing the traumatic events that they were living through – and to provide them with the skills needed to cope with their current situation once they returned back to their everyday lives.

Over one hundred widows and children whose loved ones died fighting for Ukraine’s freedom and democracy underwent a rehabilitation retreat program, organized and sponsored by CUF. The families underwent assessment by professionals and received psychological counseling, participated in life skills workshops, grief counseling seminars, projective art and music therapy sessions. A comfortable and trusting environment and nutritious meals at the hotel complex in conjunction with the aforementioned program were all part of a daily holistic approach aiding in the process of total recovery of the rehabilitation participants. The rehab programs‘ success isevidenced by the post-treatment assessments by psychologists and widows comments in the Ukrainian portion of this report.

The Rehab Retreat Program is a cornerstone for further development of similar programs which currently are unprecedented in Ukraine. The network of The Rehab Retreat Program‘s participants has gone on to work within their own community: Many of the participants have even initiated their own programs, for example one widow has set up a prosthetics rehab center for victims of the War. News of the Rehab Retreat program funded by CUF is spreading: participants have gone on to share their knowledge, skills and contact information acquired during the retreat with other individuals who are affected by the Anti Terrorist Operation in Ukraine – the waiting list is growing every day.

Canada-Ukraine Foundation is now in the process of planning to operate four more in first half of 2015.