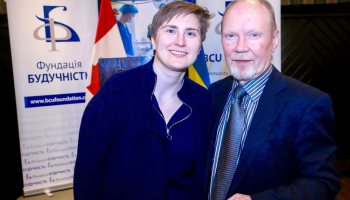 Multi-award winning “Recovery Room”, directed by Adriana Luhovy, received a standing ovation at the Toronto Premiere of the feature documentary film, organized and sponsored by BCU Foundation (Buduchnist Credit Union). With over 300 in attendance, the screening was held at Old Mill Guildhall, on March 22. Among special guests was Andriy Veselovsky, Consul General of Ukraine to Toronto.

Opening welcome remarks were given by the evening’s Master of Ceremony Ivanna Baran-Purkiss, director of corporate communications BCU. She called upon Roman Medyk, chair, board of directors, BCU Foundation who outlined the work of the Foundation in support of Ukrainian Canadian projects and expressed his delight to present “Recovery Room”.

Medyk was followed by special guest Dr. Oleh Antonyshyn, head of the Canadian humanitarian medical mission to Ukraine, organized by the Canada Ukraine Foundation (CUF). Dr. Antonyshyn mentioned the contribution Adriana Luhovy’s documentary is having in telling the story. He gave an overview of the work done by CUF and its president Victor Hetmanczuk, thanking all the medical volunteers that dedicated their time on the medical missions. With many of the volunteers present at film premiere, Dr. Antonyshyn asked the medical professionals in the audience, with whom Adriana worked, to stand, acknowledged with a round of applause. Many of these volunteers were interviewed by Adriana for the documentary, while in Kyiv. Oksana Kuzyshyn, president of the League of Ukrainian Canadian Women, spoke about the upcoming Medical Mission which will be held in Odesa.

Speaking next was special guest Sylvie Monette of KPMG-Montreal, who, through a chance acquaintance and continued friendship with Luhovy, closely followed Adriana’s efforts in making the documentary. Monette, who appears in the film, travelled with Adriana to Ukraine to see first hand the Maidan, meet the soldiers, and learn about the story. She also made a surprise announcement, that Luhovy will be a recipient of a “One Woman Fearless” Award to be presented by Concordia University at the Montreal Women’s Summit, at Loyola campus on April 21. The award is for recognizing a woman living fearlessly, “using her gifts to serve or inspire others”, exemplified by her work on the documentary “Recovery Room”.

Speaking last, Baran-Purkiss called upon Luhovy, after presenting her short biography and mentioning the eleven international awards the documentary has received. Luhovy thanked all present and spoke briefly about giving back to the community; her years of volunteer work as a student with orphan children in Ukraine for Help Us Help the Children. While in New York, having worked for a human rights organization, Adriana received an invitation by CUF to join the CUF medical their mission as their photographer, which resulted in her decision to film, to ensure the story of the ongoing war, its impact and the humanitarian efforts was documented.

Luhovy shared her personal story, overcoming inner hurdles, having been emotionally affected by doing interviews, capturing stories of the wounded soldiers and being in the operating room at the Kyiv Main Military Clinical Hospital, while filming. She also shared, for the first time, how as a student she lived through the horrors at Montreal Dawson College shooting in 2006, fleeing for her life, with the shooter just above her in the College atrium. Flashbacks of both the college shooting and the emotional effect of documenting the stories of the wounded soldiers and medical personnel in Kyiv, still affect her. Adriana thanked BCU Foundation for their generous support of this film project from its early beginnings, the Shevchenko Foundation, as well as the support from many in the community without which the film could not be made. She mentioned the film was a two-and-a-half year team effort, thanking producer-editor Yurij Luhovy, producer Zorianna Hrycenko and Oksana Rozumna, script editor. In Hrycenko’s remarks, she mentioned how the documentary helps reinforce the continued efforts of Ukrainian Canadian Congress, Ukrainian World Congress (UWC), CUF, and community organizations in helping Ukraine come through a war, now in its fourth year.

During the film screening, the audience sat motionless, amid laughter and tears. After the film, Adriana Luhovy was moved by the warm and spontaneous response. Among remarks about “Recovery Room” were, “an important document that captured both facts and emotions”, and “inspirational, heartbreaking … extremely moving documentary that will ignite global interest about the war in Ukraine and Russian aggressive and its brutal tactics”.

The film was accompanied by an exhibit of over 20 of Adriana’s photographs of the CUF medical missions, brought to Toronto from Montreal by BCU Foundation. A reception followed. The evening was filmed by director Stephan Bandera and his film crew for Forum TV which will air shortly. A Ukrainian-language version of the documentary “Recovery Room” is in production. The documentary is under the patronage of UWC. A screening of “Recovery Room” will be held at Concordia University in Montreal, end of April.