A team of 20 Canadian medical professionals, including surgeons, anesthetists, and nurses, are in Ukraine on a mission to offer reconstructive surgery to soldiers and civilians wounded in the conflict in the country’s eastern regions. 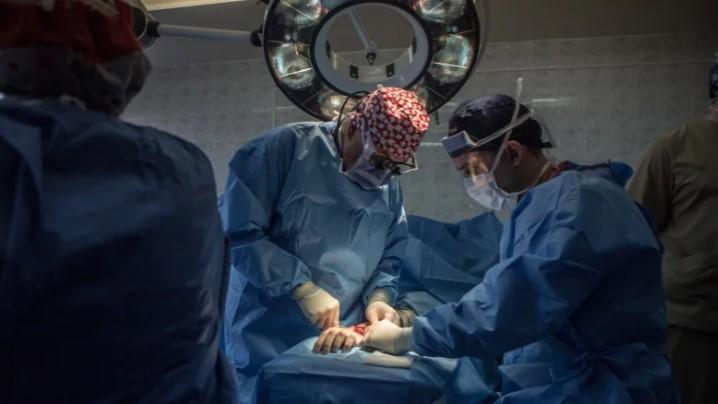 During the summer of 2016, in one tragic moment, Evgen Redka lost his friend, his left eye, and the ability to anonymously walk the streets without the concentrated stares of strangers.

The young Ukrainian soldier was nearly killed when the vehicle he was in drove over an anti-tank mine in Eastern Ukraine.

The blast left Redka with excruciating scarring on his face and body, but with help from a specialized team of Canadian medical professionals, there’s hope that Redka will once again be able to lead a more normal life.

A team of 20 Canadian medical professionals, including surgeons, anesthesiologists and nurses, worked out of an old Soviet-built hospital in Kyiv on a 10-day mission to offer reconstructive surgery to soldiers and civilians wounded during the conflict in the country’s eastern regions. 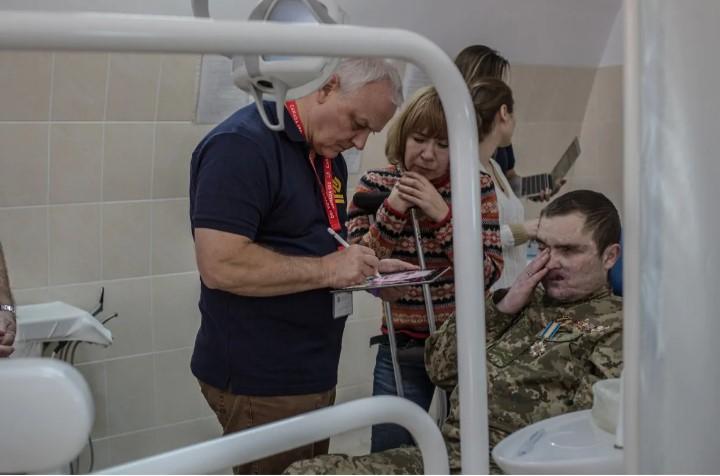 Dr. Oleh Antoyshyn, head surgeon of the mission, fills out a medical record for Evgen Redka before the soldier undergoes an operation. (Anton Skyba)

The workload is unprecedented, but there is no shortage of volunteers willing to work long hours for free, said Oleh Antonyshyn, head of the Adult Craniofacial Program at Sunnybrook Health Sciences Centre and a professor of plastic surgery at the University of Toronto.

“The days are 12, 14 or 16 hours long,” Dr. Antonyshyn told CBC News, shortly before an aide whisked him away to inspect another traumatic case. “But still we have many, many more people applying than we have room for.”

Torontonian Dr. Harry Foster and Winnipeg native Dr. Adrian Hawaleshka are veterans of the mission, which has been in Ukraine three times in the last five years.

I’m just hoping I can use my skills to give them back a bit of hope.

While the missions, organized by the Canada-Ukraine Foundation, are mainly funded by private donations, the team did receive government support in 2016. They’re also supported by Stryker Canada, which provides all surgical hardware and implant materials for the medical procedures.

Dr. Hawaleshka feels connected here as a Canadian of Ukrainian heritage, but both doctors say they want the chance to make a lifelong impact in the lives of people who otherwise would likely never get the specialized care the Canadians can offer. 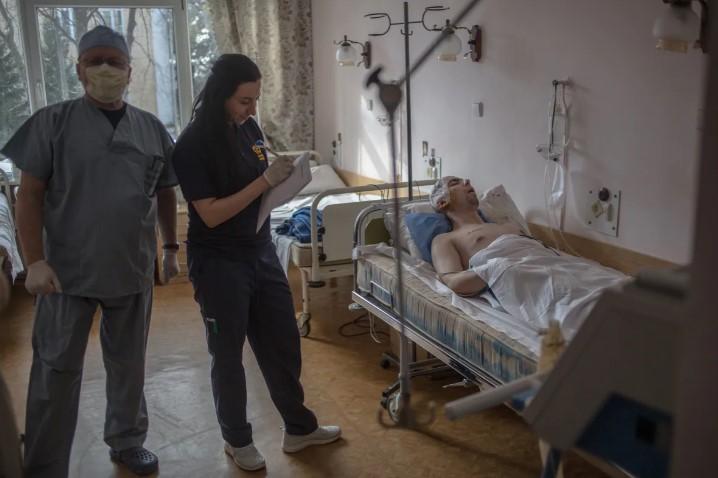 “A lot of these guys are solemn, and you can tell that they’ve lost hope at a young age,” says Dr. Foster. “I’m just hoping I can use my skills to give them back a bit of hope.”

Canadian medical professionals — including craniofacial reconstructive plastic surgeons, microsurgeons, neurosurgeons, anesthesiologists, GPs, nurses and physical therapists — have now completed over 300 reconstructive procedures on a total of 127 patients through the mission.

In 2015, they operated on a 10-year-old boy named Mykola, who was wounded by a blast in Eastern Ukraine. The boy lost both of his legs and one arm, and sustained dramatic shrapnel damage to his face and body.

He was brought via train to the Canadian doctors by a Ukrainian volunteer who’d heard about the medical mission on the news. The doctors operated on him almost immediately to help alleviate some of the scarring on the young boy’s face and to pull bits of shrapnel from his body.

Eventually, they helped send him to Shriners Hospital for Children in Montreal, where he stayed for one year while receiving prosthetic limbs and relearning how to walk. 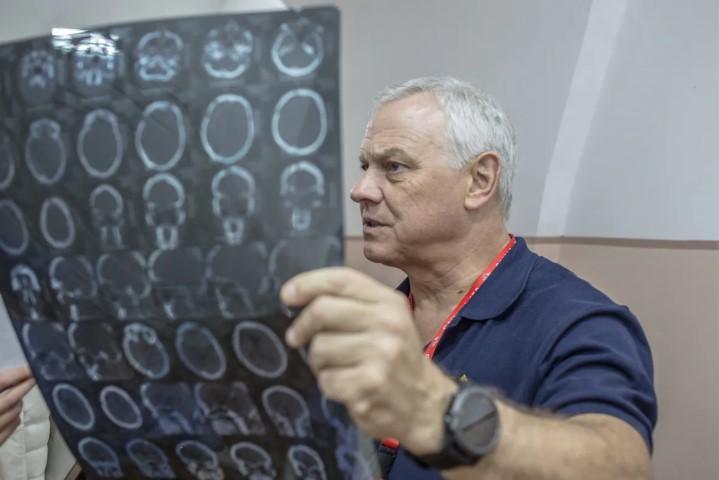 At first, the patients included civilians shot by government snipers during Ukraine’s 2014 Maidan revolution, but now virtually all the patients are Ukrainian soldiers. Their injuries are all sustained on the front lines and run the gauntlet from almost inconceivable burns and disquieting cases of facial trauma, to more minor but still debilitating wounds.

The soldiers are victims of the war in Eastern Ukraine, which began in the early spring of 2014 after Russia annexed Ukraine’s Crimean peninsula and quietly began sending troops and military equipment across the border into Ukrainian territory.

Combined Russian-separatist forces have fought the Ukrainian military since the spring of 2014. The fighting has now taken the lives of more than 9,750 people and wounded over 20,000 according to official UN figures, while displacing more than 1.8 million people from their homes.

Most of the Ukrainian soldiers seeking treatment will never be able to serve again.

At least one, Valeri Skachka, 24, recalled being trained by Canadian soldiers stationed in Western Ukraine during Operation Unifier.

“They just operated at such a serious level,” said Skachka of his time with the Canadian troops. “It was eye-opening to see that level of organization and equipment.” 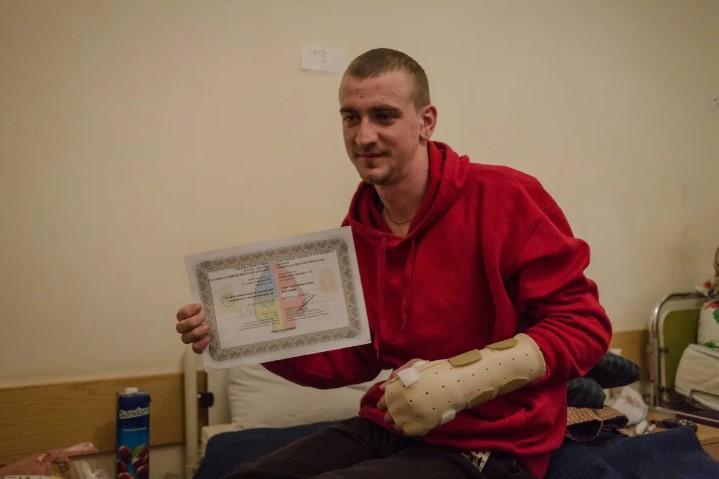 Valeri Skachka shows his certificate of participation in Unifier traning, a day after he had hand surgery from the Canadian surgery mission to Ukraine. (Anton Skyba)

Skachka is currently eager to return to the fighting, after surgery on his hand.

In two days of consultations, Dr. Antonyshyn and his team saw dozens of patients to determine whether they can be offered treatment. That’s followed by five gruelling days of intricate surgery.

And although U.S. President Trump’s commitment to Ukraine in the conflict, established under the Obama administration, has been called into question, a set of U.S. Army onlookers joined the Canadian team for this mission.

U.S. Army Major Justin Miller made the trip from Germany as part of a six-person detachment from the American military who are hoping to replicate the Canadian medical mission for their own standalone aid program for Ukraine.

“We’re in the early stages of planning for the U.S. mission,” Miller, a veteran of the Iraq War, told CBC News. “But being here and seeing the amount of injuries and disfigurements from war, I can tell you it’s been awhile since we’ve seen this on our side.” 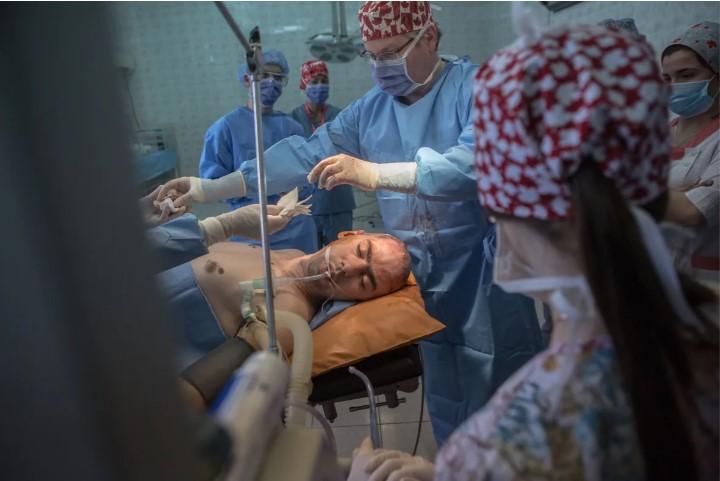