August 22, 2019
Operating as an independent rehabilitation facility, Dzherelo Centre is committed to consultation, rehabilitation treatment, education and counseling of both children with disabilities and their families. The process includes early referral, assessment and implementation of an individualized treatment plan by an integrated team of qualified professionals. To read more The Dzherelo …

April 18, 2018
The Canada-Ukraine Foundation initiated the Canada-Ukraine Surgery Mission Program in 2014. The aim is to treat those most profoundly affected by the war and to equip Ukrainian medical professionals with the skills and resources to care for them. After the last mission in 2017, two individuals were identified who needed …

January 10, 2018
Rehabilitation Retreats for Families Affected by the Antі-Terrorist Operation (ATO) in Eastern Ukraine. In April 2014, Canada-Ukraine Foundation (CUF) initiated and conducted a needs-assessment in Ukraine to identify optimal means of addressing the medical requirements of those affected by the Euromaidan protests. While the primary management of injured patients was …

March 7, 2017
Medical mission sees volunteers providing reconstructive surgery to wounded soldiers and civilians A team of 20 Canadian medical professionals, including surgeons, anesthetists, and nurses, are in Ukraine on a mission to offer reconstructive surgery to soldiers and civilians wounded in the conflict in the country’s eastern regions. Dr. Steve McCabe …

February 27, 2017
Canada-Ukraine Foundation’s (CUF) medical missions in Ukraine have been widely popularised by Victor Malarek on the CTV’s W5 show. Since 2014, CUF has sponsored four missions and the fifth mission to Ukraine started on February 25, 2017. Within the CUF missions, Canadian surgeons and nurses have completed 244 operations on …

This memorial fund was setup in 2016 by Irene Bell in memory of her father. Lviv National Agrarian University [Львівський національний аграрний університет] is a technical school located in Dubliany, Lviv oblast. The Fund annually awards a number of students scholarships nominated by the university. Click here to donate

After several years of initial efforts by the Friends of NAUKMA, CUF took over the management of all Canadian support for the Kyiv Mohyla Institute, now the National Kyiv-Mohyla University. Very significant funds have been directed over the years, to the development of this celebrated University. This support continues today.

This Memorial Fund, setup with CUF and USUF, privately funded by the descendants of the late Melania Kovaluk, provides yearly scholarships to about 8-13 high school graduates from Melania Kovaluk’s home village of Zabolotivtsi, who pursue studies at a higher level. It is managed out of Ottawa. This type of …

This Fund, set up by with CUF by COSBILD, a Toronto-based Investment Club, provides three yearly scholarships to students of Ivan Franko University in Lviv. Originally, it provided support for the Faculty of Theatrical Studies at the same university. This type of fund is again an excellent example of how …

Project Liubov-Love (in short form PLL) was created in 2001 as a Western Canadian community based project to assist impoverished children and youth in Ukraine. PLL especially assists “the poorest of the poor” in orphanages, homes for street kids, schools and school residences (“internaty”) and rehabilitation and medical centers. The …

After a Year of Care in Canada, Triple Amputee Returns to Ukraine

In 2015, Mykola Nyzhnykovskyi arrived in Canada a triple amputee. He returned to Ukraine a year later a “cyborg.”

That’s what his sister called him after seeing him outfitted with state-of-the-art prosthetic legs and arms he’s now using thanks to the hard work and generosity of a diverse group of Canadians.

W5 first met the 11 year old Mykola in Kyiv while reporting on the work of Canadian medical professionals who volunteered to treat victims of the war that’s been raging in Ukraine’s east since 2014.

At that time, Canadian surgeons removed shrapnel that had been lodged in Mykola’s face months earlier in a deadly blast that took his brother’s life. The boys had been fooling around with an unexploded munition left carelessly on an artillery range in the village of Volodarske about fifty kilometres from the front line of the military conflict.

Mykola was one of dozens of patients treated during the wartime medical missions organized by the Canada Ukraine Foundation (CUF). When Shriners Children’s Hospital in Montreal learned about Mykola’s plight, they decided to extend a healing hand to the child.

What followed was a year of care in Montreal, as Mykola and his mother Alla made the journey to a distant land whose language they did not speak.

Nine different medical specialists tended to his many ailments, more than five hundred hours of care were dedicated to his recovery, led by Shriners’ Chief of Staff Dr. Reggie Hamdy.

His physiotherapist, Rochelle Rein, recalled first meeting Mykola: “He was kind of curled into himself. Hard to express, but he was just very alone,” she told W5’s Victor Malarek.

Occupational therapist Sarah Cachecho had the job of helping right-handed Mykola learn to use his left hand and a new prosthetic arm. By the end of his year in Montreal, his progress was remarkable. Mykola had grown bigger, stronger and more determined than ever to master his prosthetics and walk again.

“Mykola can now dress himself, feed himself, brush his teeth, do whatever someone has to do in their daily life,” Cachecho said.

“Rehabilitation there would have been non-existent, the physiotherapy, the occupational therapy,” Waler explained.

Shriners covered all the medical costs, while CUF arranged accommodations, travel, food and translators through donations and volunteer work.

“To watch life being brought back into him has been an amazing journey and I can’t wait to continue watching it,” said Waler.

Mykola and Alla returned to Ukraine in late 2016, but the Canadians are not done with him yet. He’ll be back at Shriners in Montreal every year for check-ups and new fittings for his prosthetics. And the doctors of CUF’s fifth medical mission to Kyiv in February 2017 will continue working on the scars on Mykola’s face.

Nobody can bring his brother Danyo back, but Canadian generosity and hospitality did help bring back two things that weren’t there when W5 first met Mykola: hope and a smile.

On March 31st 2019, the Holodomor National Awareness Tour (HNAT) began its coast to coast travels across Canada, with a visit to St. Nicholas Church in Victoria, British Columbia and the BC Legislature on April 1st. We were welcomed to the Legislative Assembly by the Hon. Bruce Ralston: “Today in the House are a number of Canadians of Ukrainian origin who are here to launch a Canada-wide initiative to raise the knowledge of and awareness of the Holodomor.  It is the death by starvation, literally translated from Ukrainian, of six million to ten million Ukrainians — the numbers vary because it was so horrible an experience, and records were very remote — in the winter of 1932 and 1933, unknown and kept secret in Stalin’s Russia, actually, until more or less the Iron Curtain fell in 1989. 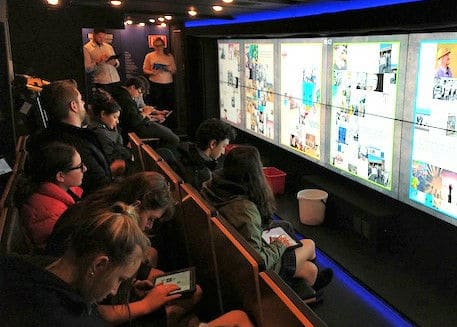 The Holodomor Mobile Classroom (HMC) is a fully self contained, wheel chair accessible RV converted into a state-of-the-art interactive audio-visual classroom. It features a 24 foot video wall made up of twelve 4k television screens spanning the length of the interior with seating up to 31 people.

A major part of the Holodomor National Awareness Tour’s mandate is to spread awareness about the Holodomor through our interactive lessons which complement high-school curricula, while teaching students about diversity, inclusiveness, tolerance and human rights, instilling upon them the need to raise their voices out of silence. 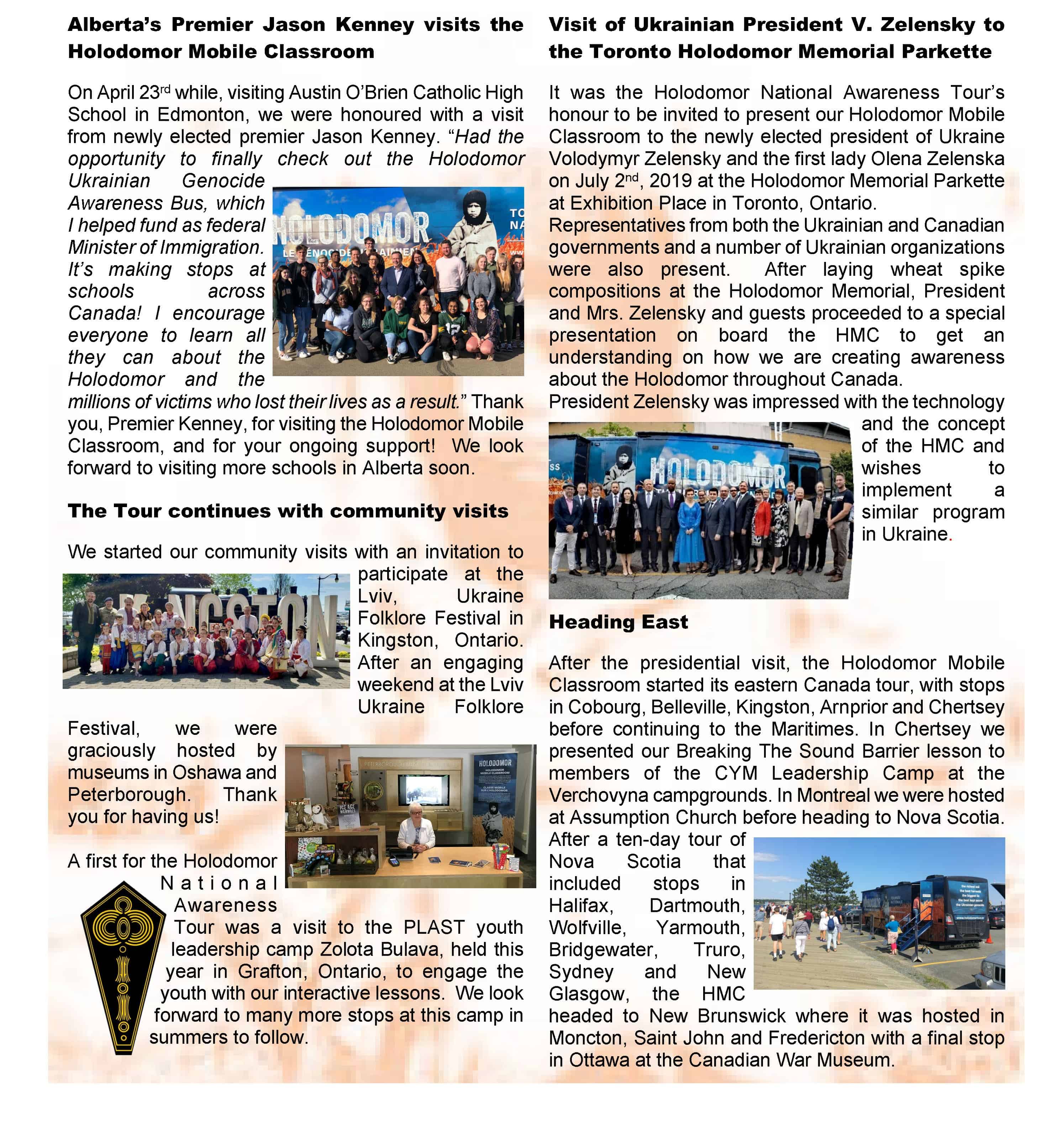